There, And Back Again (Part III): There's No Place Like Home

A tired daddy, a grumpy daddy, and a happy baby finally make it home!

22+ hours of travel time and Saffy was, to quote a fellow traveller, "a gem."  She never cried at all during the two long flights: Delhi to London, the five hour layover, and finally London to Boston.  I was so worried about the baby during traveling, but the bigger issue is other people. 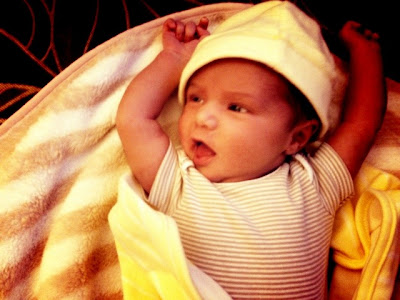 People at all three airports (officials and travelers alike) are either so self-absorbed as they bump into you holding a baby and not caring that they almost made you fall over and effectively crush your newborn; or they act as if they've never seen a f**king baby in their lives and lose their shit!  It was an endless barrage of people pointing, gawking, coming up to the baby and saying "is that a baby?" when they can fully-well see it is clearly a live baby.    Strangers often want to touch the baby's face and hands, or put their face into the baby's carrier.  They send their sick, coughing children over to the baby carrier to point and see.   "How old is it?"  "Is it a boy or a girl?"  "Where's the mother?"  "Why are you traveling?"  Groups of tourists from one side of the airport gravitate to the other side to see the baby and giggle, wanting to take pictures.  Toward the end of the trip, I had to cover her face and hide her away.

Really?  I've read it on other blogs, but really?  Who's business is this?  Why does this concern you? Why does anyone care about these strangers?  There is a weird difference in cultures.  Foreigners tell me how warm they think Americans are.  Americans, they say, will talk to you and give you eye contact and are warm and welcoming.  I don't know if I believe this, Americans seem to mind their own business.  Not that many Americans noticeably gawked at the baby, but the ones that did then quickly minded their own business.  Very few of them asked any questions, and when they did, they were satisfied that there are two dads.  "That's cool" was the common response and nothing more.  I think Americans tend to mind their own business in public.  I really believe I should tell these people a horrific lie that makes them feel awful for even asking, but then I would be further questioned and I don't think I have the energy at this point for improv.

To the officer at Logan:  you live in New England, it gets cold here you horse's ass!

Cold babies need to wear snowsuits when going into snowy weather.  You see, snow = cold baby and cold baby = negligent parent.  I was questioned (rather rudely) by security at the luggage carousel in Boston airport, because I was changing Saffy into her snowsuit (essentially a sleeved sack with a hood that you put over her clothes to keep her warm).  Since Logan airport sees fit to not put ANY restrooms on this level, nor any seating areas, I had no choice but to find a secluded corner (there was an unused desk there), and dress her.  She was never naked, no diaper changed; I simply added a layer of clothing.  He spoke to me like I was a drug smuggler or child molester, and I gave it right back to him.  I'm not sorry I laid into you, you should know better;  you're an idiot. 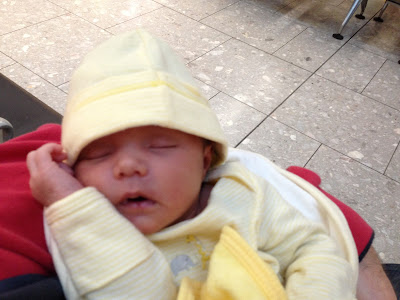 Home, Sweet Home:
We've been away for a month, and I'd almost forgotten what you looked like.  I'm tired (so, so tired!) because of travel sickness.  Traveling back in time; spending so much time in economy class, in a cramped seat; eating terrible airline/airport food; and a daughter that doesn't want to sleep, but get used to her new surroundings, climate, time zone, and pet-siblings...it definitely takes it's toll on you.  John, who hadn't slept in a 48-hour period, was a champ.  He can certainly deal with sleep deprivation much better than myself and has been taking such good care of feedings and changings.  I worked myself into further exhaustion by cleaning bottles and cleaning massive loads of laundry.  I've been dizzy since getting off the plane.

Delhi, we miss you!

Yes, even after a few hours, I miss you.  I wept on the plane as we lifted off.  You were our home for a month and the birthplace of our daughter.  You will always have a special place in our hearts.

Until we meet again, my friend.
Namaste!